Cooking Memories from My Childhood

One inescapable fact influenced every aspect of our domestic life when I was growing up. My father was diagnosed as a type one diabetic when I was four years old.

According to the medical practices of the day this meant that he had to avoid certain foods high in sugar, and seek a balance of protein and carbohydrate in each and every meal. Meals were to be taken at the same time each day – which suited his temperament anyway. He tested his blood sugar three times a day and injected insulin twice a day. 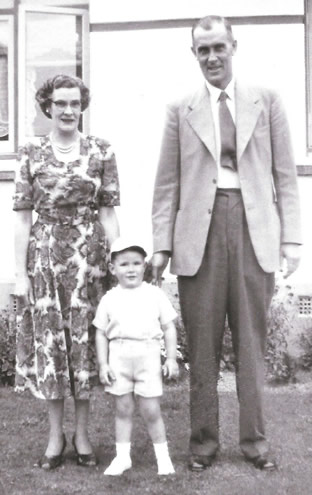 Adjustments to food intake took into account his physical work, alcohol consumption, test results and variations in meal times. In practice this meant that he ate meat, or a suitable protein substitute like eggs, three times a day, ate only certain vegetables and avoided others entirely. Broad beans were out. Peas, pumpkin, potatoes, kumara, and parsnip were allowed in regulated quantities. Silver beet, carrots, beans, spinach, cabbage, cauliflower, tomatoes, lettuce and other salad ingredients were all fine. We ate what he could eat.

There was always cold meat in the house, which he took in his sandwiches to the office each day – except on Thursdays when he allowed himself a cold meat and salad lunch at a cafe on Lambton Quay called the Rose Milk Bar – now long gone.

Cold meat was generated from a roast on Sunday – typically lamb, but often beef, only occasionally pork, and rarely chicken (which was expensive and served only on special occasions). Usually there was a second dish to generate cold meat during the week – boiled corned beef, meat loaf, stuffed topside.

Fish featured from time to time, and I can recall tripe on weekends, but offal was not a staple. Kidneys came in steak and kidney pie, but liver didn’t get across the door, and black pudding was unknown. I can recall wild foods like duck and goose being given to us occasionally, but never crayfish or scallops. Whitebait was a rarity, but my father liked oysters, and they were bought several times in a season and consumed with much pleasure.

Saccharine, the only artificial sweetener available, was used in cooking as a substitute for sugar, and my mother would preserve countless bottles of fruit each season.

For my father alone, she’d preserve 30 to 40 kilograms of pears, plus apricots, plums, peaches, and whenever our nectarine tree decided to produce, there’d be some of them too. There were gooseberries from the garden – it was my job to pick them – and tree tomatoes (now called tamarillos) from our tree.

My father ate preserved fruit with cream, and either junket or a baked custard almost every night. In the winter there was sago, tapioca and creamed rice, all of which I regarded as wholly vile. My mother and I ate preserved fruit too (ours was done with sugar not saccharine) and in winter there was apple charlotte, and steamed pudding – usually apple or peach. Ice cream was a treat.

I took my lunch to primary school each day, although I normally came home once a week. Lunch was sandwiches, usually with meat, sometimes vegemite and lettuce or Chesdale cheese slices. Salmon and shrimp paste came in a little glass jar. It sounded exotic, but was very familiar. (We saved the jars for kitchen use.) I don’t recall jam sandwiches, but I can remember both honey and banana (separately) as fillings when I was very young.

One common addition to the lunchbox was mousetraps. They were not to be confused with “cheesies”, a Sunday night staple in the winter consisting of thick slices of bread, topped with tomato, onion and sometimes bacon, and grilled until the overlay of cheese melted. Mousetraps were fingers of twice-baked bread with vegemite and cheese.

To make them, my mother would lightly toast several slices of white bread. She’d butter them and spread vegemite evenly and then scatter grated cheese lightly. The bread was then cut into fingers, usually four or five per slice, and baked in a hot oven until crisp and dry.

Once cooled they were stored in an airtight tin. I’d get two or three for a mid-morning or afternoon snack.

Helping my mother to make mousetraps is, I recall fondly, my earliest culinary experience .