My father, born in 1911, battered by the depression and by war service, didn’t say much about either when I was growing up. 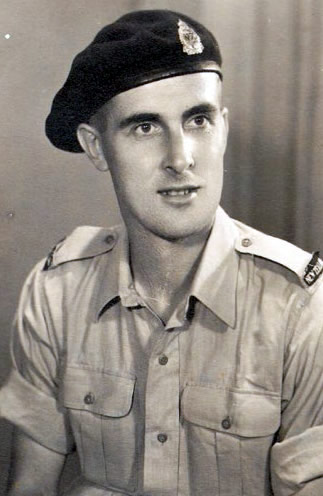 One of the few times I got him talking about his war experiences was after I came home from a Contiki tour of Europe which had included a visit to Monte Cassino, the Italian town which was the scene of a famous, but ultimately futile, battle on the Allied advance up Italy in 1944.

My father was a trooper (‘drooper’, he said) in the 20th Battalion and Armoured Regiment – part of the Second NZEF. He drove a tank, initially in Egypt and North Africa; it was a British-made Crusader with a 37mm gun. Useless, he said. Kept breaking down. Couldn’t handle the sand. Engine overheated, and 37mm was just a popgun against the German tanks with 75mm guns.

In Italy, he drove an American-made Sherman tank. Much better engine, better gears, and it had a 75mm gun which matched most, but not all, of the German armour – they had some Tiger tanks with 88mm guns, but fortunately for us, not that many.

The big clash of arms for him was at Monte Cassino. When I went there in 1980, I made a point of visiting the town and taking lots of photos. I showed him these on my return, and he became (for him) very animated and instantly recalled a series of incidents.

It was one of the few times he talked about his war experience. Very typical of his generation.

I had pictures of the abbey taken from the town. “I remember the bombing,” he said. “Huge American bombers swept it and demolished the place.” (They were the Flying Fortresses, and they dropped 1400 tonnes of high explosive on the 15th century Benedictine abbey at the top of the hill.)

By the end of 1943, German forces were spread across the peninsula and were well dug in (the so called Gustav Line). It was winter and troop movements were difficult. Two of the three highways to Rome were impassable, leaving only Highway 6 through the Liri Valley, which was dominated by the abbey of Monte Cassino 1700 feet above the town of Cassino itself.

The Allied landing at Anzio, 30 miles south of Rome but behind the Gustav Line, on January 22, 1944, was intended to open a road to Rome by obliging the German forces to pull back. In turn that would have opened up the road past Cassino.

The landing succeeded, but instead of withdrawing, the Germans counter attacked the Americans and the British at Anzio, and bogged them down, while reinforcing their positions in the Liri Valley including at Cassino.

However, the Liri Valley was the only way forward, and in the 123 days between January 17 and May 18, 1944, there were four assaults on Cassino resulting in 55,000 Allied casualties, probably twice the figure suffered by the Germans.

New Zealand’s Official War History has this to say about one attack:

“Under mortar and machine-gun fire from the slopes of Montecassino, two companies of the Māori Battalion attacked on the night of 17–18 February.

The Māoris had to flounder through water and heavy mud across fields sown with anti-personnel mines. About midnight, after a grim fight with panzer grenadiers, the station buildings and the Round House at the western end of the railway yards were occupied….”

The next day they were forced back. In March, after a long wait for suitable weather, New Zealand forces, including tanks of the 20th Battalion, got into the town centre and resisted many counter attacks, but found advancing impossible.

Of the battle the Official History says,

“… days of bitter fighting to clear a way along Route 6 had achieved no notable successes. Because of the obstacles that blocked their path, the tanks could not close on the enemy strongpoints that defied the assaults of the infantry and were forced to engage them from a distance, sometimes of only 200 yards or so. At a conference on the morning of 23 March General Freyberg had reported that the Division had ‘come to the end of its tether’.” 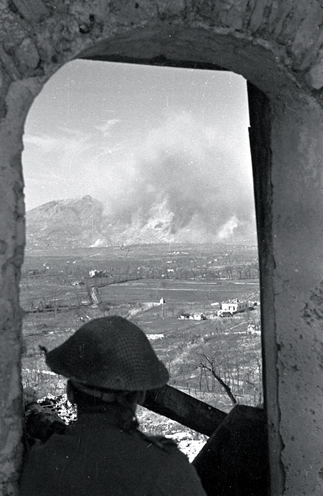 In April the New Zealand Division withdrew from the Cassino area, having suffered 343 deaths and over 600 wounded.

In May Allied forces broke out from Anzio, and after further attacks the Germans withdrew from the Cassino area.

“So many good men gone,” was what my father said, looking at my pictures of the town before he clammed up entirely, a small tear in his eye.

I never got him talking about the incident again, although it was clear he had strong memories. (However, he did tell me about how he and many other Kiwis later achieved a long-held ambition of peeing in the Po River in the north of Italy.)

He had some rather strong views about the RSA too. I recall he went to some RSA meetings on ANZAC Day when we were living in Wellington in the 1950s and 60s. On one occasion, he came home and told my mother that he wouldn’t be going again. “To listen to half those buggers,” I recall his saying, “you’d think they’d won the war on their own.”

Bragging and exaggerating one’s role in any aspect of life and work didn’t sit well with him, and perhaps that was typical of his stolid, modest Presbyterian upbringing in South Otago.

As a boy I recall he showed me some Italian currency and some occupation currency that he had collected as mementoes.

It was worthless but looked colourful and I recall some of it was overprinted to change the face value.

Later in life, and after the family had moved from Wellington to Christchurch, he attended some reunions and get-togethers specifically for those who had served in the 20th Battalion.

Those were much more amenable to him, and he met many old comrades again.

But having left, he never returned to the RSA, although I recollect that in the mid-1970s he did attend the Dawn Parade and ceremony at the Bridge of Remembrance in Christchurch’s Cashel Street on some occasions. But he stayed away from the clubrooms.

« On the 1835 Declaration of Independence
Changing with the times »